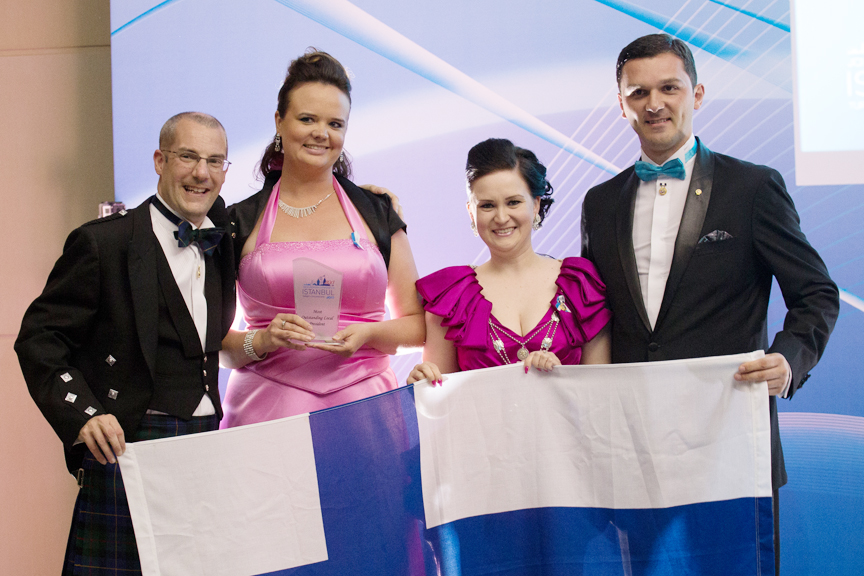 Most Outstanding Local President
Ellimaija Ahonen, JCI Pirkanmaa
”…Ellimaija can be described as a bold Local President, who has shoulders to bear the responsibility and skills to listen, inspire and mentor others. Even during the tough times, she ensured her beard came together. Ellimaija led her members by example and ispired others by doing things hands on. Ellimaija had the capacity to create a cheerful and genuine athmosphere. She made sure members had a say and board members listened carefully to create an inspiring action plan for 2014.”

”…Helena has shown tremendous growth in her time in JCI Mikkeli. She became a member in 2004 and has been active ever since in many ways and many levels. She has developed herself by taking responsibilities in many projects and different activities. She has worked as a trainer for several years in JCI’s formal trainings as well as in many other trainings. Skopa has actively inspired members by her own example of taking on new challenges and bringing positive energy to JCI Mikkeli…”

The Best Long Term Project
NASAKKA, JCI Kajaani
”…NASAKKA is a European Union funded project that aims to commit young adults to live in Kainuu by bringing them unique international opportunities. NASAKKA offers networking possibilities within JCI and the chance to activate young active persons and prevent youth alienation. One of the biggest challenges in Kainuu is that young adults leave the region, leaving Kainuu with less young professional to develop and vitalize their region. The European Union funding program has provided funding of over 64,000 Euros for JCI Kajaani to work towards this goal.”

Public Speaking Championship
Petri Eklund, JCI Liminganlahti
”…The JCI World Public Speaking Championship offers members a unique opportunity to exercise and showcase their abilities and to share ideas on important local, national or global issues. A speech competition requires a special kind of public speaking, challenging participants to express creative ideas in a clear and captivating manner. Public speaking is a critical skill of a leader who can motivate people toward positive change. Every well-prepared speech should have an introduction that captures the attention of the audience, a body featuring the speaker’s message, and a powerful conclusion summarizing the speaker’s arguments. The competition gives every participant a way to express their thoughts to others in an exciting and challenging way. National Public Speaking contest winners compete at the JCI Area Conferences. Eklund is the winner from JCI Conference in Europe and is representing Europe in the final round of the JCI World Public Speaking Championship at the 2015 JCI World Congress to be held in Kanazawa, Japan in October.”